Two days ago, a friend told me about cold shower therapy.

Cold sho·wer ther·a·py
noun
1. The act of taking one 5-minute (minimum) cold shower each day for 30 days to better oneself in getting comfortable with the uncomfortable.

In the safety of a Chinese restaurant, away from the immediate cold of the cold shower, I told her we should both do it. 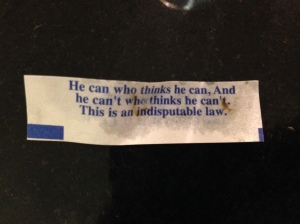 My other friend who was at lunch with us politely declined.

Between that moment and this post, I discovered a number of things:

Let me clarify. I’ve only taken two cold showers so far but I really do feel like it’s worth continuing. For one, I finally started blogging, something that’s been on my to-do list for a few months.

So here are a few things I equate to taking a cold shower:

(I’m mostly kidding about that last one.)

So tomorrow’s day 3 and I’m going to be taking a cold-er shower than the past 2 days. Wish me luck.

My face before the cold shower hits. At least I’m not a cat.

P. S. For those of you who do not personally know me, or don’t know me that well, I would like to introduce you to my 4-year old cat, Pumpkin. She is a FIV-positive tabby that I adopted about a year and a half ago. She will often be my visual representation for events and emotions in my life.